Two months into the New Year -  And I'm still fat! 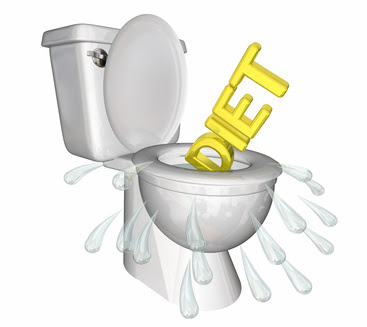 By the end of February resolutions have already drifted from our minds. We’ve joined gyms, signed up for diet programs, started the latest fad diet, with no noticeable results. Or, just as bad, took off a fast ten or fifteen pounds only to gain it all back in a week or two after giving up.
What happened to our fresh resolutions?
A resolution, from the word resolve, is defined as firm determination and sounds way too much like restriction.
How about goals? Unlike a resolution, a goal is a something positive that we want to achieve, not a restriction. Positive is good.
The holidays, along with all the food temptations that come with them, have been over for weeks. It’s time to resume normal eating. Normal? Normal might be defined differently for each of us. For me, there is no “normal”. I’m either closely watching my caloric intake, or overeating, seldom anything in between.
It is time to dust off those New Year’s resolutions and turn them into manageable goals. A goal can be as simple as a mental picture of something you want to accomplish or can be a formal outline for a goal’s accomplishment. The most important thing is to choose goals you are excited about achieving in order to motivate you to complete them.

1.    Write them down. Give them the added formality of typing them and printing them out. You might want to have a separate list for your goals for the week, month, and year. Anthony Robbins advocates a five-year plan—think about what you’d like your life to look like in five years—it’s an eye opener!
2.    Have your goal sheet somewhere you will see it every day. I keep a set of weekly goals on an index card next to my computer.
3.    Don’t try to do too many goals at once. Pick two or three, or even only one if it is something important to you.
4.    The more difficult the goal, the more necessary it is to have a list of action steps you will do in order to achieve it. Divide the steps into long and short-term solutions.
5.    Procrastination can be overwhelming, thus emphasizing the need to have increments toward the achievement of your goal. Begin with that baby step—but begin!
Many years ago, I was stuck in a job I found unfulfilling and I made a goal for the year to change my career path by taking advantage of the tuition reimbursement plan my benefit package offered. I wanted to go back to school for my Master’s degree, a huge task that involved a lot of work just to get started. I took an immediate first step and contacted a university for information about the programs. It was a small step, but the catalogue they sent made the goal real and feel more attainable.
I began classes that spring and graduated three years later.
Make that first step a small one and make it today. You’ll be surprised how it inspires you to keep going.

Dear Readers,
An accomplished goal does not happen by throwing a coin into a fountain and making a wish. If you tucked those resolutions you wrote on New Year’s Day into the pile of detritus on the top of your desk, that’s most likely where they‘ll stay—buried.
Whatever your goal, keep it in sight and take a first step toward its completion. What you focus on becomes more and more real to you.
I wish all of you a healthy and amazing new year!