Here is a sneak peak at my latest suspense release, GIRL UNDONE. This book is the third in the TJ Peacock and Lisa Rayburn suspense series. If you enjoy these first two chapters, please go to Amazon.com for your own, personal copy.
http://goo.gl/6fizeJ 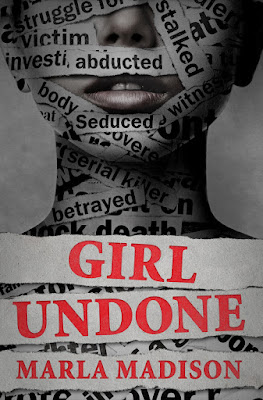 Lisa Rayburn listened intently as her last patient of the day complained about her husband’s unfaithfulness. Ordered to attend counseling after a domestic dispute incident had been filed, Emma Le Gesse had yet to exhibit any true signs of remorse. It wasn’t often Lisa came across a situation in which the woman was the physical abuser, mainly because most men were ashamed to report it.
True to form, Emma had been raised in a household where corporal punishment had been an everyday occurrence.
“I understand it must be painful, finding out your husband cheated on you,” Lisa said, “but, Emma, you need to find a way to deal with your anger without resorting to violence. Let’s go ahead and work together toward that end.”
Emma ran a manicured hand through her long, ash-blonde hair. “I should just divorce the son of a bitch.”
“That is an option, Emma. But you understand that wouldn’t resolve your problem, don’t you?”
Emma shrugged. “I suppose.”
Often, Lisa had deal with the fact that a therapist couldn’t do much to help a patient who didn’t want to face their problem. Emma had been taught early in life that if she did something perceived as wrong, punishment in the form of a slap or the end of a belt wasn’t long in coming. Children typically carried that lesson into their adult lives.
Lisa knew the only way to make women like Emma want to change, was to help them find other ways to deal with anger and frustration. The challenge was motivating the patient to desire that change, because he or she was usually resistant. “Before we break today,” she said, “I’d like you to keep a diary of your emotions for a week and note exactly how you respond to them. And most importantly, begin thinking about alternatives to striking out with violence.”
Frustratingly, advice advocating alternative responses tended to work only when the abuser realized that once they were in the judicial system, a second violation would mean jail time.
After Emma left, Lisa checked her messages and found one from her friend Shannon, marked urgent. She played it back. “Lisa, I want to give you a heads up on this. That crime blogger, Bart Kosik, is going to do a series of articles in December about murders that happened during that month. He’s starting out with the one we worked on. I think our best bet is to ignore it, don’t you? I’ll be in the office in about an hour. We can talk about it then.”
Lisa felt a heavy ache in the pit of her stomach. She turned on her computer, opened up Kosik’s blog, and skipped to the final paragraph of Bart’s Crime Beat.

A new month begins in four days. My December blogs will be about famous crimes that happened during the month of Christmas Carols, shopping, lights, and Nativity scenes.
To kick it off, the first one will be none other than the one that happened right here in our own fair city. To be accurate, this crime didn’t happen only in December but was spread out over a matter of years throughout Milwaukee County. Yes, I’m talking about the case of the missing women that made headlines here less than two years ago. We’ll be looking at the crime, the killer, and the people who brought the case to the attention of the MPD. Stay tuned!

Lisa closed the computer and took a few deep breaths—Kosik was going to examine the people who brought it to the attention of the police. Not again. A December blog wouldn’t be the blogger’s first article on the subject, but it would be the first in more than a year. She had been naïve to think that her and her friends’ involvement had been forgotten.
More than a year ago, Lisa and TJ, along with Shannon, Jeff Denison and Eric Schindler, had turned over enough evidence to the Milwaukee police to force an investigation into the reason why so many abused women were going missing. Jeff and Eric were husbands of two of the missing women. The men had not abused their wives, although both had misguided 911 calls in their backgrounds, which had brought them under suspicion. Bart’s Crime Beat had publicized the part all of them played in revealing the murders of the missing women—and not always in a positive way.
Lisa considered calling TJ or Eric and then decided she might be overreacting; she’d talk to Shannon first since she was due in any time now. Shannon, who worked for the attorney Lisa shared space with, acted as Lisa’s receptionist when she was around and had become a close friend.
Lisa made herself a cup of tea and sat where she could gaze out at the lake. Under the dull November sky, the waters of Pewaukee Lake were lifeless, the color of wet cement.
The case of the missing women, abused women, had changed her life in many ways, some good, and some disturbing. Her friendship with TJ would never have come to pass without their common goal of bringing the police proof that foul play   had increased the usual number of missing women. And Eric—their relationship hadn’t gotten off to an amicable start but had ultimately become the most important one she’d ever had with a man, one she promised herself would be her last. Remembering the good things, Lisa resolved not to stress over anything Bart Kosik had to say about them.
Shannon rushed in, cheeks red from the brisk, late-November wind. Her black, waist-long hair was tied back into a loose tail with a bright orange scarf. She asked, “Are you all right?”
“I’ve been better,” Lisa replied. “I had hoped all of this was behind us.”
Shannon dropped her backpack on the floor and hung up her coat. “Damn books get heavier every semester.”
In her second year of law school in Madison, Shannon commuted to her classes from her home in Waukesha and still worked afternoons at the real estate office next to Lisa’s office whenever she could. Earl Albright, the attorney who owned the business, was grooming Shannon to take over when he retired. Albright owned the building that housed his law business and Lisa’s office.
Shannon picked up a cup, filled it with tea and took a seat across from Lisa. “We can’t stop this blogger from writing about us. We can only sue if he publishes something that isn’t true. And even that gets tricky. The guy is a master of the now-you-see-it-now-you-don’t spin.”
“Sue him? You’re kidding. He would probably love that. The man is always trolling for publicity. I wouldn’t give him the satisfaction of suing. You’re starting to sound like a lawyer already.”
“I was getting around to saying that the best course of action for now is to ignore it,” Shannon said. “You know how these things go, tomorrow he’ll have someone else to rake over the coals, and we’ll be back-page news.”

I am so excited to be releasing my third book in a series. This is the TJ Peacock and Lisa Rayburn series, which starts with the first suspense book I wrote, She’s Not There. When I wrote it I had not planned on it being a series, but many readers wanted more. I was so happy about that I wrote Trespass as a follow up, and now, this one, Girl Undone. If you're interested in receiving notices for book deals and new release specials, please sign up for my mailing list.
Hope you enjoyed the preview chapters. Thanks for stopping by.