THE KEPT WOMAN
BY
KARiN SLAUGHTER 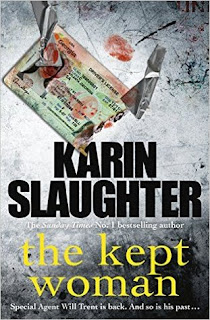 Much as I enjoy Slaughter’s Will Trent, a detective with a complex past and an even more complex relationship with a woman from that past, I found this latest episode of Trent’s life frustrating to read.
Trent’s new involvement with Sara Linton is crippled by Trent’s inability to let go of Angie, the woman from his childhood whom he both grew up with and married. A lot of series do this, keep the main character from moving on from an old relationship that forever pops up when he or she has a new person in their life. I think most of us readers get weary of ongoing triangles and would appreciate new obstacles for the main character.
Not only does Slaughter bring Angie back in this novel, but also, despite several attempts on her life, she manages to survive to come back in the next one!
As a whole, the book was rather long. It might have been easier to read if it had been tighter, especially a long episode of Angie’s life and an endless survival scene near the end.


Despite those criticisms, The Kept Woman is an enjoyable suspense read, worthy of a weekend spent on the couch.

Dear Readers,
I am sure that many, if not most of Slaughter's fans will not mind Angie's perpetual returns to Will's life. I do love her writing, but found the above mentioned criticisms rather slowed down my enthusiasm as I read The Kept Woman. It could be just a personal like, but at some point in a series, I want the main character to move on and learn from past experience.
Have a warm and wonderful Thanksgiving,
Marla
Posted by Marla M at 7:54 AM 1 comment: