ICED MALICE is the second book of my suspense series that stars Detective Kendall Halsrud. I enjoyed writing about Kendall so much that I decided to continue her as a series. The story again takes place in Eau Claire, Wisconsin where Kendall is a police detective and is backgrounded by the winter of 2014, the coldest and longest-lasting winter in the area since the early 1890s. Although the book is the second in the series, the story can easily be read as a stand-alone. I hope you enjoy the first chapter! 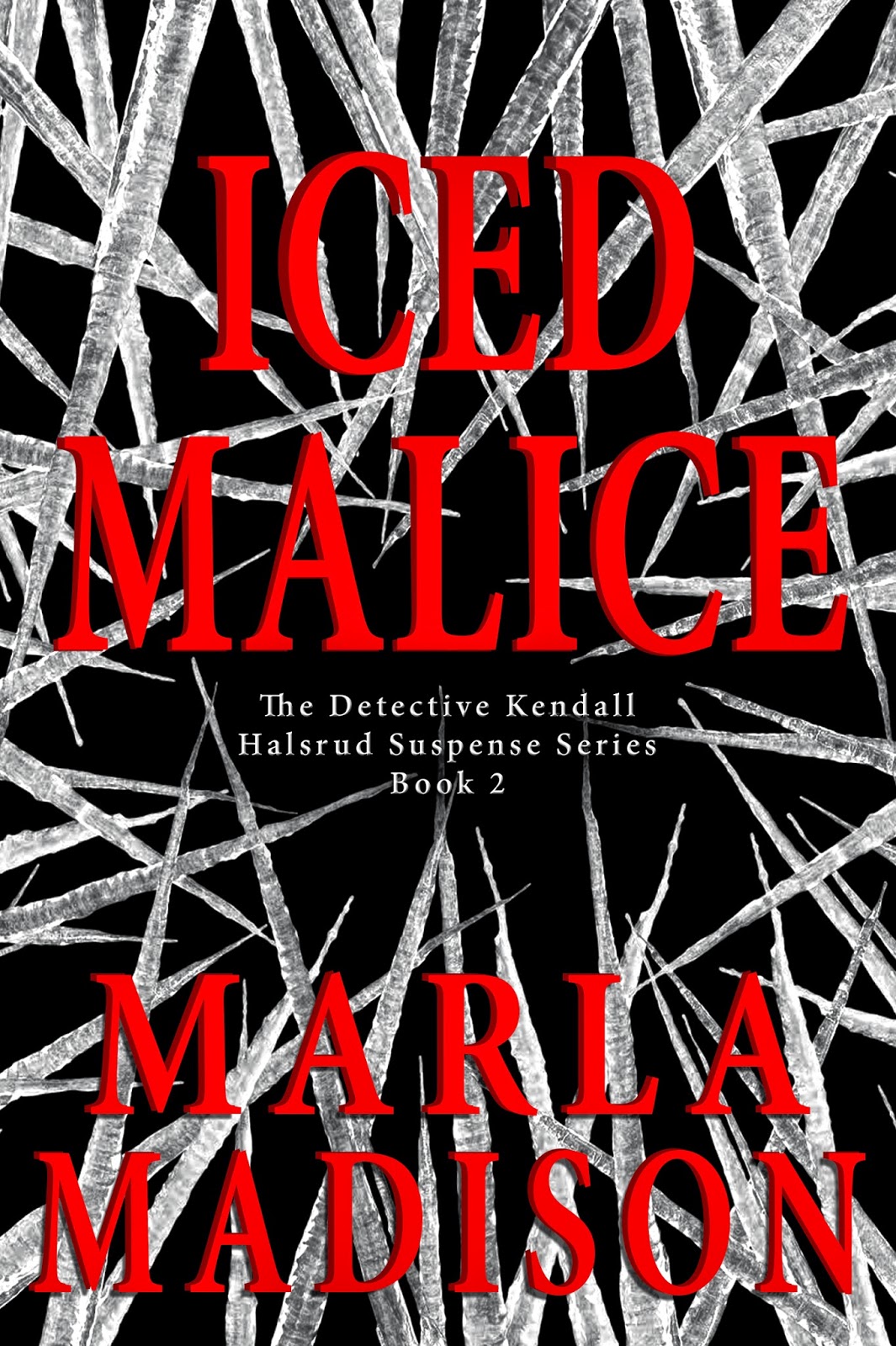 Amazing that the below-zero temperature coupled with high winds and icy snowflakes hadn’t kept the drinkers home tonight. Cabin Fever Night at the bar had exceeded Nick’s expectations, and even the cost of the taco buffet and that of bringing in a DJ from Menomonie, Wisconsin, wouldn’t take much of the profit. Almost twenty minutes from closing and the crowd hadn’t even dwindled. Nick would have to give them a last call soon.
Crap. He had a drunk to drive home. Ever since opening night, he vowed to make anyone who overindulged give up their keys. If they didn’t have a ride, Nick drove them home after closing. So far, it was working. Chuck Wetzel, a regular and a known alkie, had tossed Nick his keys tonight after ordering his third drink. Unfortunately for Nick, Chuck lived with his parents in a subdivision south of town—about as far from Nick’s place near Lake Hallie as possible.
Nick couldn’t wait to get home, crawl into his warm bed with Sara and give her the good news; tonight’s take was the best since opening night. Nick and Sara had owned the bar on the northern edge of Eau Claire for seven months, and the finances were just starting to edge into the black. This freaking cold winter hadn’t helped.
He saw that Chuck had managed to get off his bar stool and take a trip to the john. At least he was walking; Nick was weary of dragging Chuck’s sorry ass out of the bar and driving him to his front door. When Chuck came out, he walked back to his barstool and pulled on his coat.
“Hey, Chuck,” Nick called, “ease up a minute. I can’t leave yet.”
“No prob, Nick,” he called back. “Keep the keys for me. I’ve got a ride.”
Relieved, Nick flipped on the Last Call sign and announced, “That’s it, folks!”
A few people ordered their one for the road, as most of the crowd wandered out into the night, the open door letting in a blast of frigid air. The icy draft hit Nick’s nostrils when he inhaled, and for about the hundredth time during the long stretch of below-zero days, he thought about adding an entryway to keep the cold air at bay.
Next year.

Shortly after midnight the snow made its first appearance, and the wind picked up, spreading mournful howls into the frigid night.
Patti Olson edged over to the window. Snow had drifted across the front of the house, accumulating nearly to the windows. The weatherman on the TV said this was the worst winter in twenty-five years.
Patti had begged to be able to stay alone all night. After all, she was eighteen now, an adult. And Mommy kept saying she wanted Patti to be able to do things that “normal” girls did. Patti knew she wasn’t normal. One time she heard someone call her a “downs,” whatever that was. She never got to do half the things other kids did.
Normal girls could stay home alone when they were over sixteen. Patti knew that, because her cousin Emma, who was fifteen, told her that at her last birthday party.
Patti hated that scary noise the wind was making, and the rattling windows set her teeth on edge. She ground them, nervously. Mommy always told her not to do that, but who would know? Mommy wasn’t here. Patti’s palms were sweating and she couldn’t sit still; she even wished Mommy hadn’t given in and let her stay home alone. Her little brother Keithy—he hated when Patti called him that—went to bed a long time ago and nothing ever woke him up.
She thought about calling Mommy. The telephone number of Mommy’s friend was on a little pink note stuck to the desk by the phone. But Patti had called her three times already, and Mommy said not to call again unless it was an emergency. She said that after the third call, when Patti called to ask her if she should wash the dishes she used to make popcorn for her and Keithy. The list Mommy left for her said what she could and couldn’t do tonight, and the list hadn’t included washing the dishes. So Patti had to call and ask her.
Taking care of her little brother was a big responsibility. Patti thought she shouldn’t go to bed when everything was so scary, so she stayed in the living room and watched TV. After turning up the volume to drown out the noisy wind, Patti leaned back on the sofa and covered herself with the afghan grandma had made for her. It was crocheted in her favorite colors, red and blue. Keithy said it was ugly. But he was only eight, and he was a boy. Everyone knew that boys didn’t know about what was pretty or not, and Patti loved the afghan—took it to bed with her at night, too.
When the first knock sounded at the front door, Patti thought it had to be coming from the program she was watching. It wasn’t, though, because she was watching her favorite show, Friends, and right now the friends were all sitting on the couch in the coffee shop and no one had to knock to come in there.
The second knock was louder. Patti’s heart pounded. She thought she heard a voice, a man’s voice, but that was impossible. No one ever came to visit in the middle of the night.
She looked at the clock and saw that it was after three in the morning. Maybe she should call Mommy. Was this an emergency? No, she didn’t think so. Emergencies were when someone was hurt, or got shot, like they did on the TV programs Keithy watched. If the house was on fire, that would be an emergency, but the house wasn’t on fire.
Another knock.
The voice again, louder this time, but Patti couldn’t hear what the man was saying, not over the wind’s dreadful screaming and the loud commercials. She covered her ears. Mommy said to never, ever, open the door to a stranger, no matter what. She counted to ten to keep from crying like a little baby. Then to twenty-five.
Patti knew how to count all the way to a hundred, so she kept going. After reaching thirty, her fear caused her to stumble on some of the numbers, taking her nearly five minutes to get to a hundred. When she did, she uncovered her ears and turned off the TV. She listened.
Nothing.
The only thing she heard was the sound of the wind. Patti listened for another five minutes. No more noises.
Good. She wouldn’t have to call Mommy again.

Dear Readers,
Thank you for letting me share the beginning of my fourth novel with you. As you know, I have two series going now, and am now working on the third in the TJ Peacock & Lisa Rayburn series. I hoped to have that one ready by the beginning of summer, but have been learning to format my own books, and that has taken up a lot of my time. Undone, the one I’m working on now, will probably not be done now until the end of the summer.
Hope you are all having a wonderful spring season,